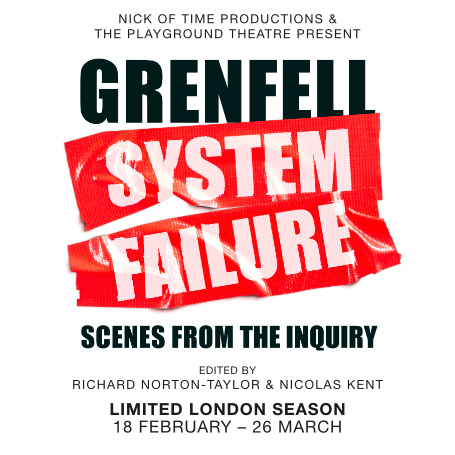 Based entirely on the words of those involved in the final phase of the Inquiry (December 2020 – July 2022), this new play interrogates why the testing regime failed to warn of the danger of installing inflammable materials, why manufacturers promoted such products with no regard to safety, why government regulations ignored the dangers and were not updated, and why politicians failed to ensure proper oversight. Through the testimonies of bereaved residents, it explores how they were failed by the London Fire Brigade on the night and abandoned by the Local Authority in the chaos of the fire’s aftermath.

Grenfell: System Failure will tour to three West London venues: The Playground Theatre, The Tabernacle and the Marylebone Theatre, bringing the production closer to the communities affected by the tragedy than previously possible.

This limited season is brought to the stage by the creative team responsible for Grenfell: Value Engineering at The Tabernacle, Birmingham Rep and on Channel 4, The Stephen Lawrence Inquiry – The Colour of Justice at the Tricycle Theatre, the National Theatre, in the West End and on BBC TV, and the Olivier Award-winning Saville Inquiry play, Bloody Sunday.

Book Now for The Playground Theatre

Book Now for The Tabernacle

A series of panel discussions will take place alongside the production hosted by guest organisations including Grenfell United, Justice4Grenfell, Next of Kin and Lancaster West. For dates and times of the Q&A events, please visit: www.grenfellsystemfailure.com

Age Restriction
Suitable for a general audience, recommended for ages 12+.

Advisory Information
The play contains graphic descriptions of the residents’ evacuation during the fire and their experiences during the aftermath.

The Producers cannot guarantee the appearance of any particular artist, which is always subject to illness or injury.