THE SHOW MUST GO ON! – LIVE AT THE PALACE 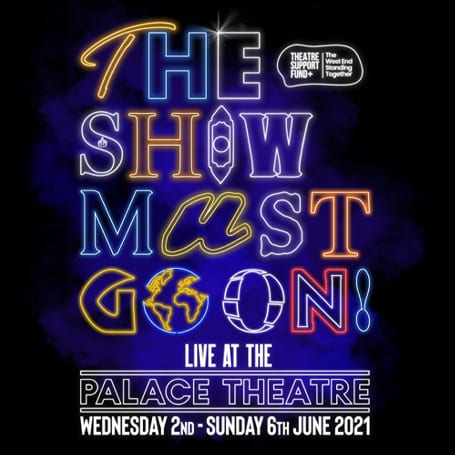 Theatre Support Fund+, the team behind ‘The Show Must Go On!’ campaign and MZG Theatre Productions are delighted to announce 18 West End shows and an all-star musical theatre cast coming together for a unique one-off concert in the biggest West End celebration this summer in ‘THE SHOW MUST GO ON! LIVE AT THE PALACE THEATRE’ from 2 – 6 June 2021.

All shows which appear on the iconic The Show Must Go On! design will be performing alongside Pretty Woman and a West End debut performance from Back To The Future. This will be the first time in history these West End musicals will come together for one night of pure joyous entertainment which celebrates the wealth of talent in London and includes a multi award winning creative team, over 50 performers and an orchestra made up of some of the finest musicians in London.

The producers are thrilled to announce the full line-up and casting for the concert which includes:

The Palace Theatre operates strictly under the government COVID-19 guidelines. For further information check our COVID-19 secure information page. Bookings can be for up to six people from mixed households or larger where only two households combine. If you or anyone in your party experience symptoms of COVID-19 or are required to self-isolate we have a 100% exchange guarantee up to 24 hours before your performance. Please contact boxoffice@nimaxtheatres.com and they will assist.