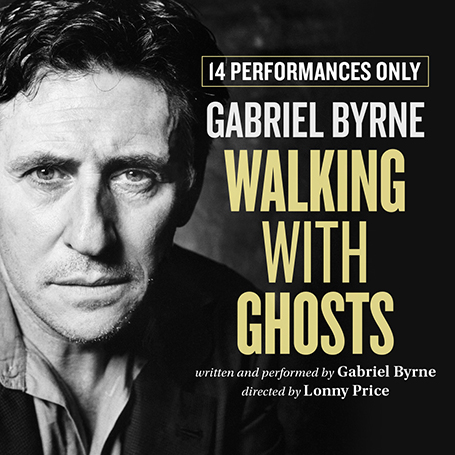 ★★★★★
‘This enthralling show is one of Gabriel Byrne’s greatest achievements.’
Daily Telegraph

★★★★★
‘An effortless masterclass in storytelling’
The Stage

★★★★
‘One of Ireland’s finest performers at his best. A master of his craft’
Sunday Times

★★★★
‘Gabriel Byrne is on spellbinding form’
The Times

Moving between childhood memories of an Ireland that has almost vanished, to a commentary on Hollywood and Broadway stardom, Walking with Ghosts is by turns hilarious and heart-breaking, and a lyrical homage to the people and landscapes that ultimately shape our destinies.

A Landmark production
presented by Neal Street and Playful Productions

The Apollo Theatre operates with mitigation methods to help reduce the spread of COVID-19. For further information check our COVID-19 secure information page. If you or anyone in your party tests positive for COVID-19 we recommend you stay at home; we operate a 100% exchange guarantee up to 48 hours before your performance. Please contact boxoffice@nimaxtheatres.com and they will assist.

Gabriel Byrne in Walking with Ghosts at the Apollo Theatre London 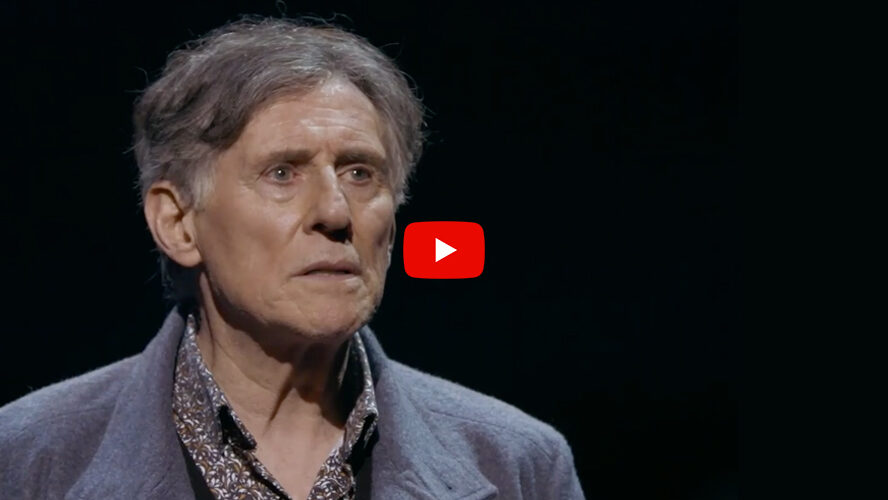 Byrne has worked with some of cinema’s leading directors, including the Coen Brothers, Wim Wenders, Costa Gavras, Jim Jarmusch, Ken Loach, John Boorman, David Cronenberg and Bryan Singer.  He has starred in more than 80 feature films including Excalibur, Miller’s Crossing, Into the West, The Point of No Return, Little Women, Spider, The Usual Suspects, Dead Man, The End of Violence, The Man in the Iron Mask, Vanity Fair, Jindabyne and Wah-Wah.

In 2019, Byrne was honoured by IFTA with a Lifetime Achievement Award.  In 2021, he received the IFTA Best Actor Award for his latest film, Death of a Ladies’ Man.

On Broadway, Lonny Price directed Sunset Boulevard, Lady Day at Emerson’s Bar and Grill, 110 in the Shade, Master Harold… and the Boys, Sally Marr and Her Escorts (co-written with Joan Rivers and Erin Sanders), Urban Cowboy, A Class Act (Tony Award nominated for Best Book of a Musical, co-written with Linda Kline), and Scotland PA, which had its world premiere at Roundabout Theatre Company’s Laura Pels Theatre in 2019.

West End credits include Lady Day at Emerson’s Bar and Grill, as well as Carousel, Sunset Boulevard, Sweeney Todd and Man of La Mancha, all for English National Opera.

Film and television credits include his film version of the New York Philharmonic’s Sweeney Todd and Company.  He also directed the stage and filmed versions of his tribute to Stephen Sondheim, Sondheim: The Birthday Concert! (Emmy Award).  Other Philharmonic collaborations include the ‘Live From Lincoln Center’ broadcast of Camelot, Candide, Sweeney Todd (Emmy Award), and Sondheim’s Passion (Emmy Award).  Additional television credits include Lady Day at Emerson’s Bar and Grill for HBO, as well as episodes of 2 Broke Girls, Desperate Housewives and The Jack and Triumph Show.  For his first feature, Master Harold … and the Boys, he received a Best Director Award from the New York International Independent Film and Video Festival.

His documentary, Best Worst Thing That Ever Could Have Happened premiered at the New York Film Festival and was named one of New York Times’ Top 10 Films of 2016, and his other documentary Hal Prince: The Director’s Life (PBS) was also released to critical acclaim.

Joan O’Clery is a costume designer working in both stage and screen.  She is a three-time winner of Best Costume Design at the Irish Times Irish Theatre Awards and has been nominated three times for Best Costume Design at the Irish Film and Television Awards.  She has originated the costumes for several world premieres by major Irish writers including Seamus Heaney, Brian Friel, Tom Murphy, Marina Carr and Frank McGuinness.

Recent theatre credits include The Saviour and The Approach (Landmark Productions); Medicine and Woyzeck in Winter (Landmark Productions and Galway International Arts Festival); Macbeth (Shakespeare’s Globe); Macbeth, She Stoops to Conquer (Royal Shakespeare Company); An Enemy of the People and The Little Foxes (Gate Theatre); DruidMurphy (Druid); Faith Healer, She Stoops to Conquer and The Unmanageable Sisters (Abbey Theatre).

Her screen work includes the television series Kin and Finding Joy (RTÉ).  Feature film credits include Dating Amber, King of the Travellers, Swansong, Snap, Out of Innocence, I, Dolours, Rose Plays Julie, and The Delinquent Season.